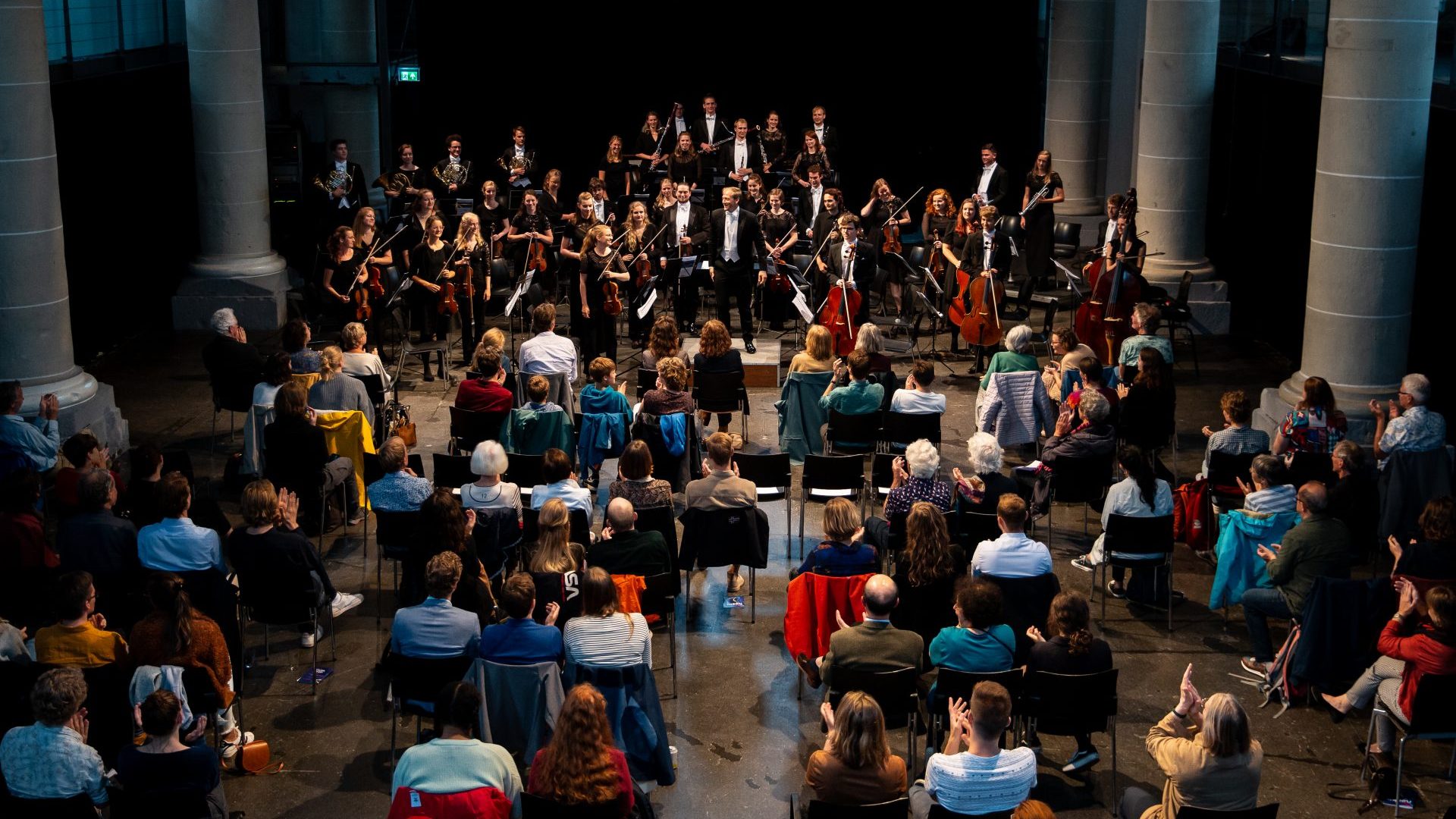 Tour Nesko 2023
The 59th edition of Nesko will take place in April of 2023. This year, the Nesko will play a commissioned piece from Karmit Fadael, Dvořák’s only occasionally played violin concerto, and Beethoven’s seventh symphony. This year, Sander Teepen will be Nesko’s conductor!
Nesko’s theme for this year is ‘Nesko naar de natuur’ (which roughly translates to ‘Nesko into nature’)! In today’s busy time, where everyone always has to be available, it is sometimes very nice to be able to take a quiet moment in nature and get your thoughts in order. Many composers have also used nature as a source of inspiration, which is why we as Nesko want to emphasize how nice nature is in promoting creativity and relaxation this year.
Program

Violin concerto in A minor

Symphony no. 7 in A major

In 2023, the Dutch Student Chamber Orchestra will be under the musical direction of the enthusiastic and renowned conductor Sander Teepen.

Sander Teepen was born in Deurne into a musical family. He started playing the oboe at the age of 8 and studied at the Fontys Conservatory with Herman Vincken. He substituted as an oboist with, among others, Het Residentie Orkest, philharmonie zuidnederland, Het Gelders Orkest, Het Brabants Orkest and the Limburg Symphony Orchestra. He is also associated with the Anemos Arts Ensemble, composed of musicians from philharmonie zuidnederland.

Since September 2020, Sander has been affiliated with Codarts Conservatory in Rotterdam as professor of orchestral conducting.

Sander also conducted the Nesko in 2019. Both Sander and the orchestra enjoyed the collaboration tremendously. 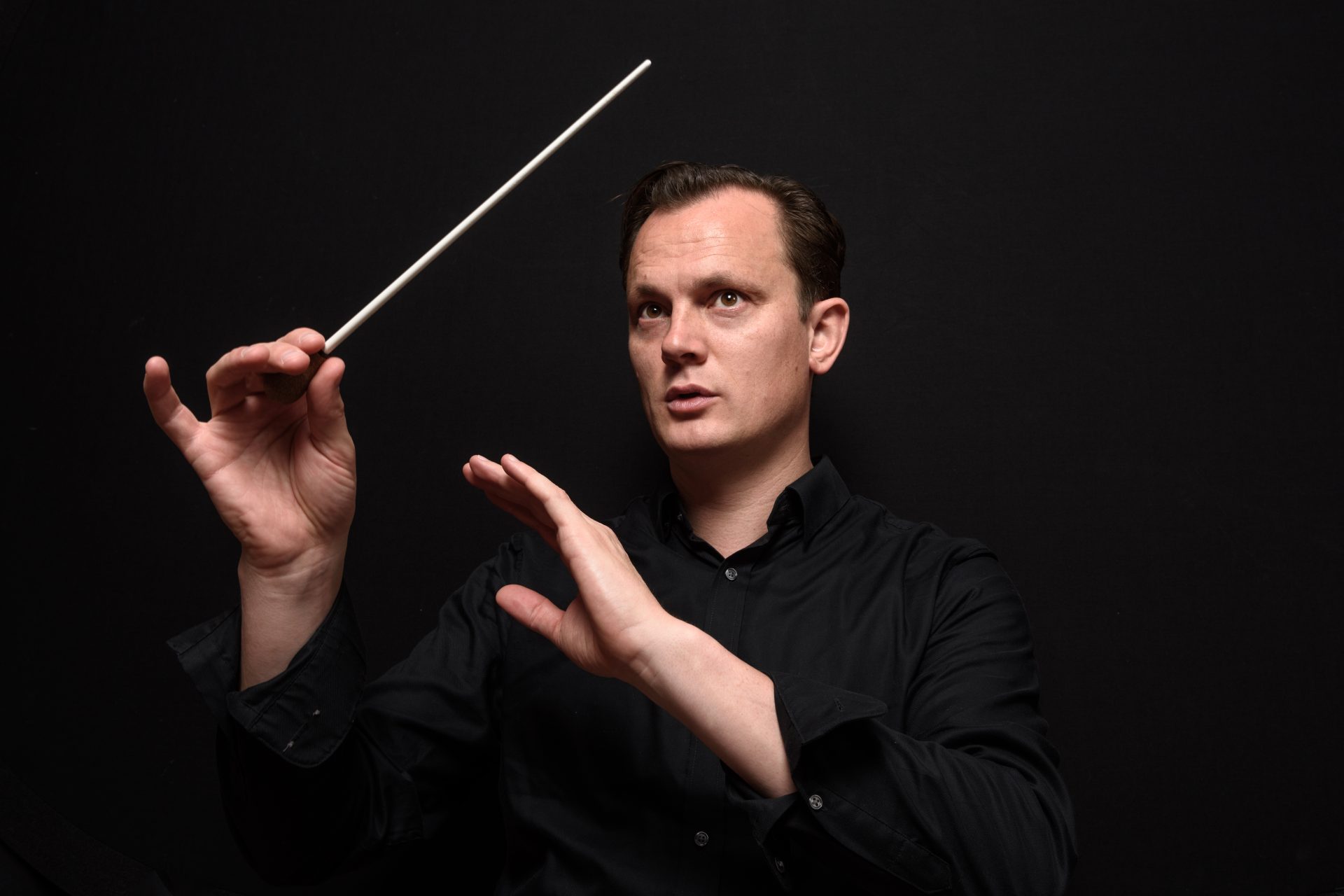 In 2023, the Dutch Student Chamber Orchestra will play with Niek Baar, where he will be the soloist in Dvořák’s violin concerto.

Dutch violinist Niek Baar has made a name for himself in recent years as a charismatic and serious musician, who has been able to thrill audiences nationally and internationally, receiving rave reviews for this at such renowned venues as the Philarmonie Berlin, Concertgebouw Amsterdam, Gewandhaus Leipzig, Oriental Centre Shanghai and the Gewandhaus in Munich.

A major boost to his career came in 2018 when he won first prize at the Oskar Back Competition in the Netherlands.

Niek, who made his solo debut with the Rotterdam Philharmonic at the age of 16, is a regular soloist with orchestras such as the German Radio Philarmonie Saarbrücken, Concertgebouw Kamerorkest, the Radio Philharmonic Orchestra and the Residentie Orkest in The Hague.

He is also an enthusiastic chamber musician and a much sought-after guest at festivals such as the Bach Festival Dordrecht (Netherlands), Marvão International Music Festival (Portugal) and the Festspiele Mecklenburg-Vorpommern (Germany).

An intensive and long-term musical collaboration links him with the pianist Ben Kim, with whom he has already given several duo recitals in the Concertgebouw Amsterdam, the Konzerthaus Berlin and the Gasteig Munich (broadcast live by BR-Klassik). The debut at the Philharmonie Essen followed in November 2021. For “Avrotros Klassiek,” the two musicians recorded a CD of duo works by Kreisler, Bach, Mozart and Beethoven.

A particular highlight recently was Nieks return as soloist with the Rotterdam Philharmonic, with whom he played Max Bruch’s Scottish Fantasy in three concerts in the Rotterdam Doelen, and the Concertgebouw Amsterdam.

Niek Baar toured Germany with the Concertgebouw Chamber Orchestra and recorded his debut CD with them for Channel Classics / Outhere Music, which was released in August 2022 and has since received extremely positive reviews both nationally and internationally.

Niek has a special connection to the music of Robert Schumann, who fascinates him as a person and composer, and whose three violin sonatas and rarely performed violin concerto are among Niek’s core repertoire. Other important pillars in the violinist’s broad repertoire include the music of Johann Sebastian Bach and György Kurtág.

Niek has won numerous national and international music competitions, including the 2010 Princess Christina Competition (1st prize) and “International Solo Bach Competition” in London 2012 (1st prize). He also received the Grommek Prize at the Kronberg Festival and was awarded the Kersjes Prize in 2015.

Niek Baar was born in Rotterdam in 1991 and received his first violin lessons at the age of eight. Four years later he was admitted to the preliminary training at the Royal Conservatory in The Hague. Here Niek studied successively with Mireille van der Wart, and Peter Brunt and graduated cum laude in 2012. He then studied at the Hochschule für Musik ‘Hanns Eisler’ in Berlin with Prof. Stephan Picard and obtained his master’s degree there with distinction in July 2016. As of 2016, Niek continued his studies in Munich with Prof. Christoph Poppen. Two other musicians and teachers who greatly inspired Niek were Mihaela Martin and Dutch cellist Anner Bylsma.

Niek lives in Berlin. He plays on a violin “ex Vornbaum” built by Carlo Bergonzi in Cremona in 1729. This violin belongs to the Tjardus Greidanus Foundation in Amsterdam and was loaned to Niek by the Foundation. 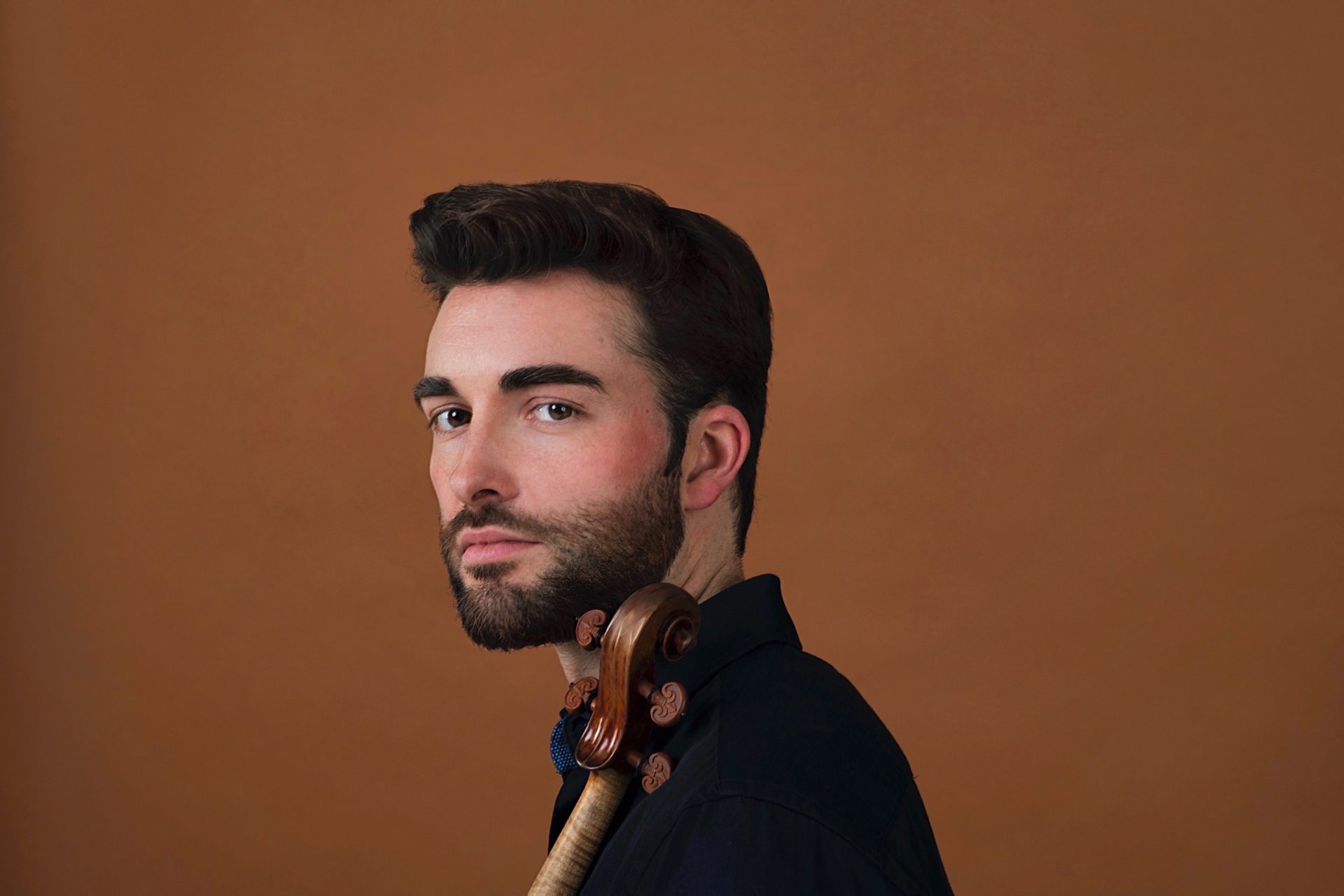 “As a person I am emotional, opinionated, rational but also calm. You can recognize these qualities in my music. In my work I try to cooperate intensively with musicians. In this way I hope to enchant the audience with the power of my notes.’

In her music, through melodies, harmonies and structures, she is looking for many kinds of sound combinations. In which she likes to combine ‘old’ techniques with ‘new’ elements. She is also a great lover of overtones and non-Western scales.

During her studies she wrote for various ensembles and received master classes from Michael Pisaro, Kate Moore, Mary Oliver, Geza Szilvay (founder of the violin method ‘Colourstrings’). She participated on violin in the Dutch Impro Academy and played in the Young Metropole (project orchestra NJO:Muziekzomer). In 2018, she unanimously won the ‘Tromp Composition Concours’.

In 2021, she was awarded a stipend from the Friends of the Radio Philharmonic Orchestra. She has also received commissions from the NTR:Zaterdagmatinee, the Radio Philharmonic Orchestra, the Residentie Orkest, Amsterdam Sinfonietta/the Cello Biennale, Gaudeamus and November Music, among others. Her works are performed all over the world. Including such prominent venues in the Netherlands as the Concertgebouw, Muziekgebouw aan ‘t IJ and TivoliVredenburg. 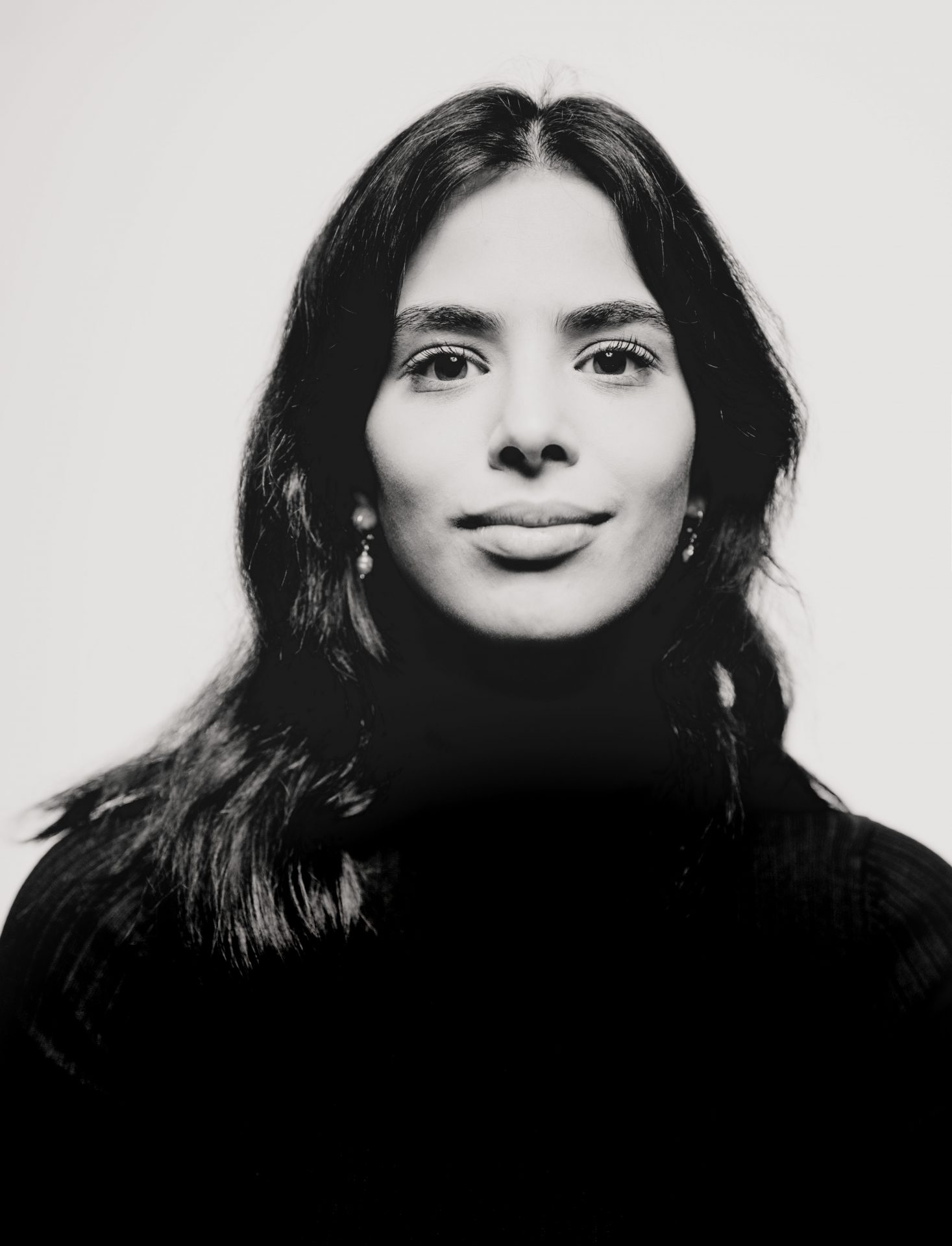 Lunch concerts
During the tour, in addition to the regular evening concerts, lunch concerts are also given by the members of the Nesko in smaller chamber music ensembles.
During the rehearsal week, ensembles are formed that will give lunch concerts during the tour for groups of people that are less likely to come into contact with classical music. These concerts are given, for example, in a penitentiary institution, a primary school with special education and a psychiatric institution. Would you like the orchestra members of the Nesko to visit your organization to give a lunch concert? Please contact our orchestra chief at orkestchef@nesko.nl! 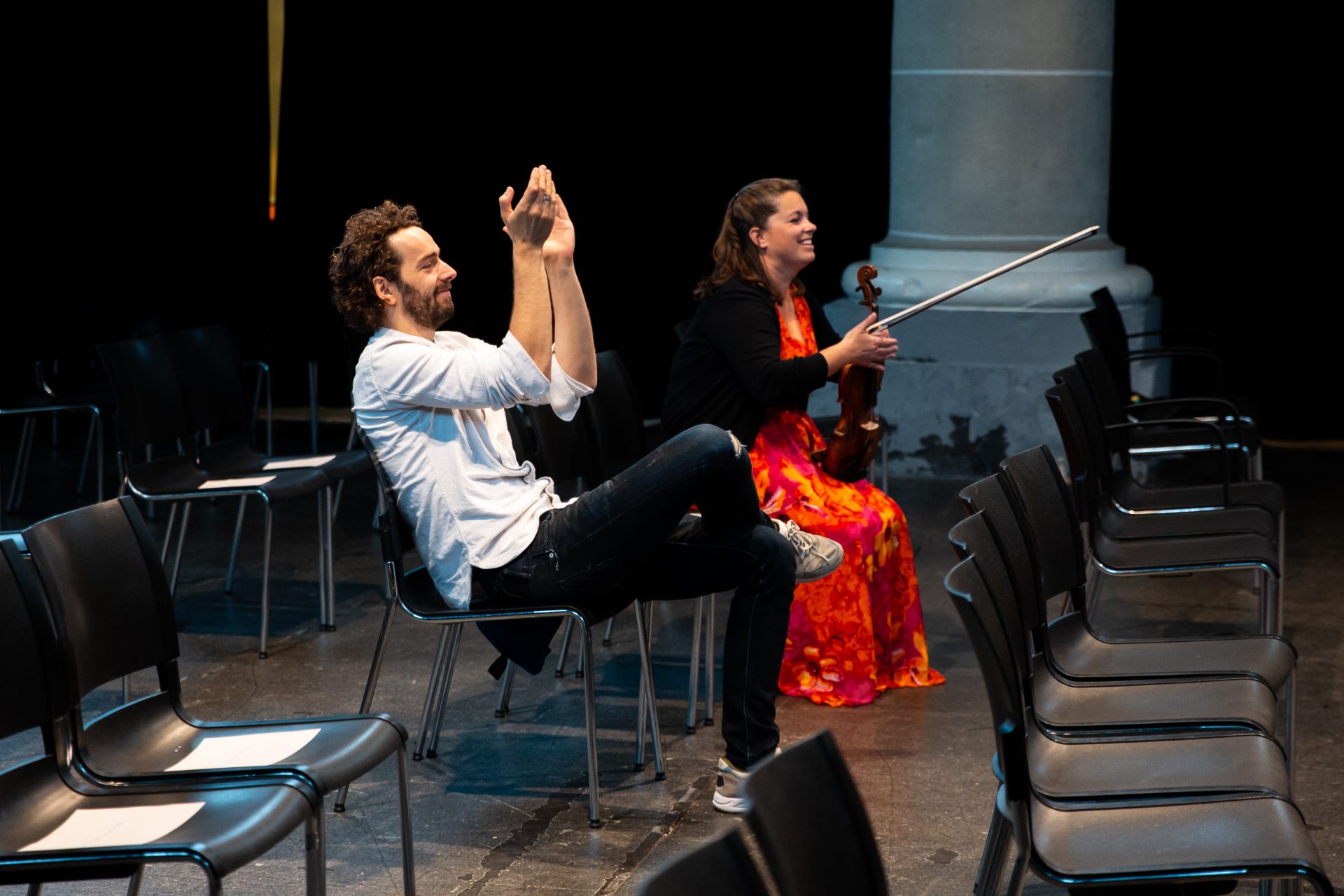 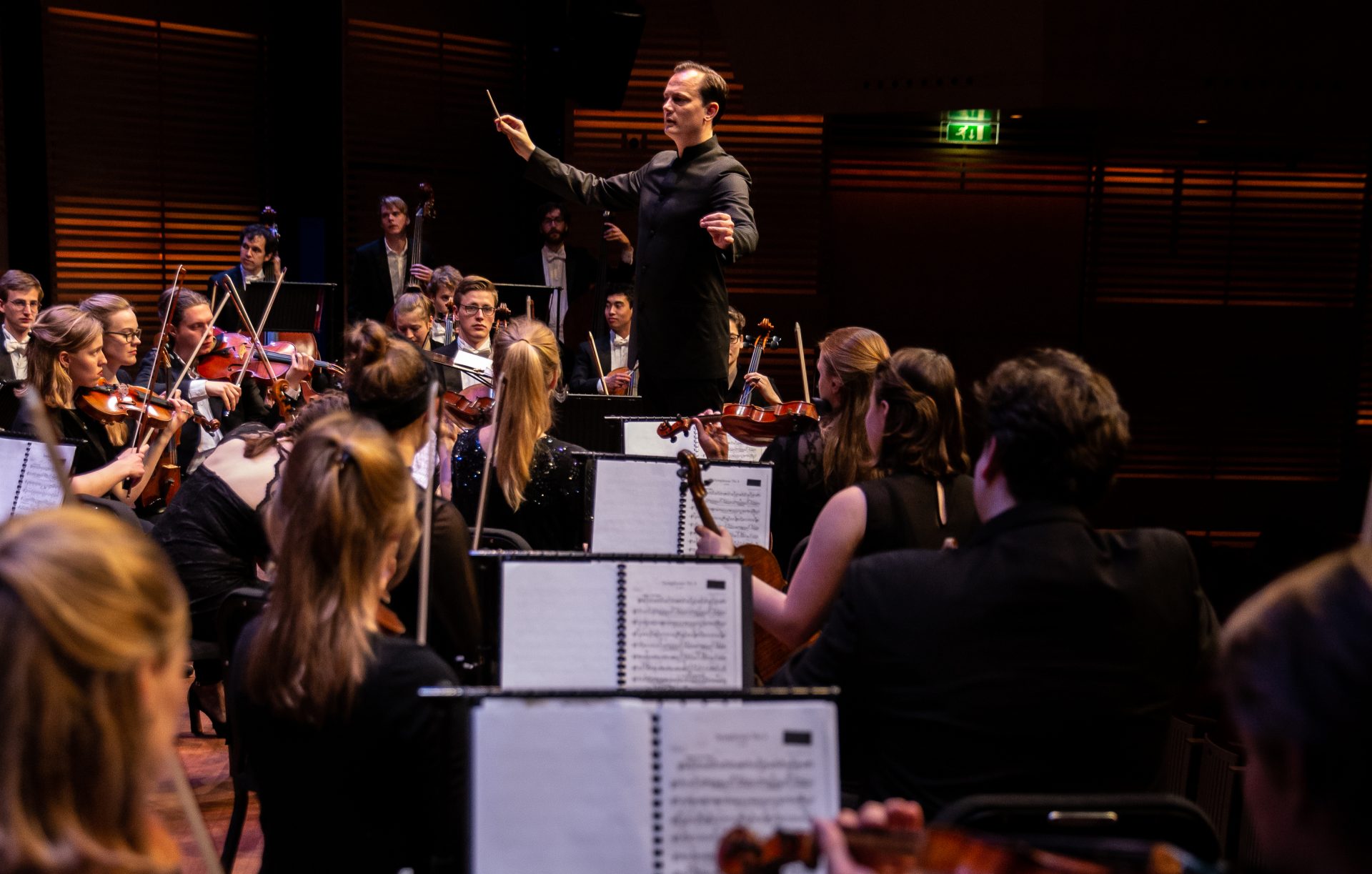 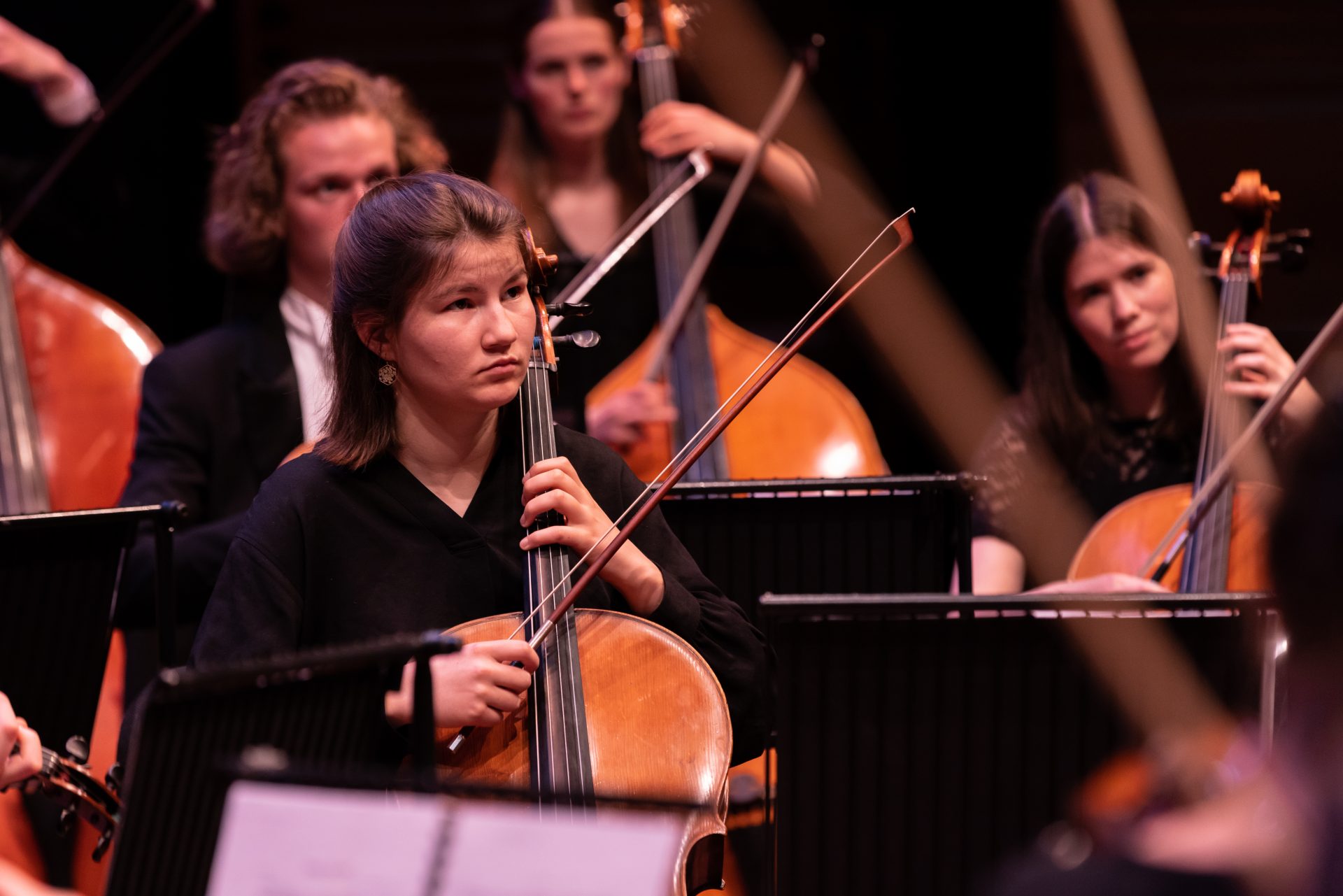